So, it all began really well. I guess we had to be tested in some way, I just hadn’t expected it to be so soon. I’ve put off writing this for well over a month because I’m not entirely sure what to say about it all. Sailing is great, we love it but I would be lying if I said I wasn’t a little afraid of it now. France was a dream, there was so little to challenge us. We had no broken engine, no broken sail, no broke anchor and most importantly no waves, not of any consequence anyway. That changed when we left La Rochelle for our two day offshore Biscay trip. The plan was to cut right across to Gijon, Spain. We had several reasons for this, the most important one being the large shooting range we would have to cross if we hugged the coast. The former just seemed safer. We waited and waited for a good weather window, finally it came.

We headed out early that morning. The waves were up. I do remember feeling that they were too high but we had checked every forecast around and they were predicted to calm right down by that evening. It was all manageable, or so we thought. As we headed away from sight of land the squalls began. At first we were pleased, they had us flying along and a really good speed, upwards of eight knots. But as squall after squall hit we were reefing and reefing the sails but we couldn’t seem to reduce our speed. I wasn’t keen on that feeling. We watched the grey clouds edge away above us and believed we were clear. But as the last grey cloud disappeared from sight, the wind did not. It was nearing 25 knots, not horrendous but not what we were after either.  Chris checked the weather three times on that trip, this was unheard of for us. We don’t usually need to. This should have been our first alarm. The weather was not doing what it was supposed to. We should have turned for land right there. Something felt off and we knew it. As the evening neared we were exhausted. The wind had had it’s turn with us and now it was the waves who wanted a go. At 9pm the night began to close in, it’s an eerie time I always find but being 80 miles from land makes it worse still. Chris went down to check on the kids and I took to my feet to watch the rising waves. They were messy and erratic. Not rolling as they had been all day. They were big, perhaps three meters and we had been pitching and rolling along with them for hours now. We were almost at the continental shelf and had read that it could cause problems but for the most part it was okay in fair weather. The weather wasn’t fair but neither was it stormy. As I turned behind me I heard thunder and looked up as a huge wave crashed over the Bimini and flooded into the boat. Looking down I saw the guardrail dip below the water. I was leashed in, thankfully. I turned to see two more just like it looming over my head. I yelled for Chris. We came back almost as quickly as we had been knocked down. We were still upright. Chris rushed into the cockpit to find me shaking violently and unable to breathe. Thankfully, he took control and we turned stern to the waves and basically surfed them back towards land. It was a long night. Neither of us slept but as the sun rose, the waves calmed and we relaxed a little. We headed for Bilbao, through the shooting range, having received permission over the radio. A huge pod of Pilot Whales joined us, with their calves and so many dolphins.

Whilst in Bilbao we knew that we weren’t the only ones to be caught out that day. Another yacht had arrived and they had aborted their crossing too. The experience had been altogether too much for them and they were finished with their trip entirely.

This experience has made us cautious and it has shaken our nerves. Since this event, we have been caught in 40 knots winds with the sea whipping up a frenzy but it felt so different somehow. So much more controlled. The waves in Biscay appeared to build almost instantly and they came from nowhere. Threatening everything we held dear. I just did not think it would happen to us. It happens to bold sailors, we are not bold. But the weather does what it does and we have been in situations since that have made me uncomfortable but not fearing for our lives, thankfully.  We are better prepared now. If the sea builds we place the washboard in and we have the sea anchor in our lazaret ready to go. Hopefully, we will never need to use it. We were naive trusting the weather as we did, it was stupidity. We do not do that now. If we head out and it feels off, we head back in. I suppose we learnt our lesson early and with no harm done.

On a lighter note, we have made it to the glorious Mediterranean! What a place! The kids have snorkelled to their hearts content. We have seen whales bedside the boat, not sure what type, so I’ll just say the BIG kind. Sunfish, flying fish and endless dolphins. We are blessed to be here on this journey. It is not easy, we have had more breakages than I can count. Including engine failure at 1am, whilst at sea with zero wind. It’s always a challenge but the highs allow the terrifying lows to pale into insignificance because when it is good, it is so so good. I will always be wary of the sea, I cannot trust her anymore but then I should never have done so in the first place. She holds our home but she is not always an ally. We carry on with tentative steps, gently pushing ourselves onwards because nothing worthwhile ever came easy. My fear will ebb, I am sure of it and in the meantime I revel in the downtime at anchor, in the calm, flat seas and the most magnificent sunshine. And as Chris and I have recently come to conclude, sailing in either heavenly or hellish, for us there does not seem to be an in-between. And when it goes right, the thrill is un-parrelled. Of course, when it goes wrong…….well I’ve explained all that already. Ta da! 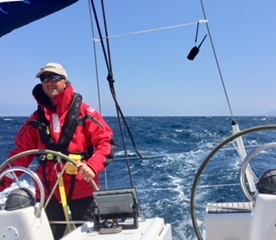 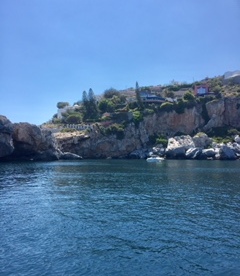